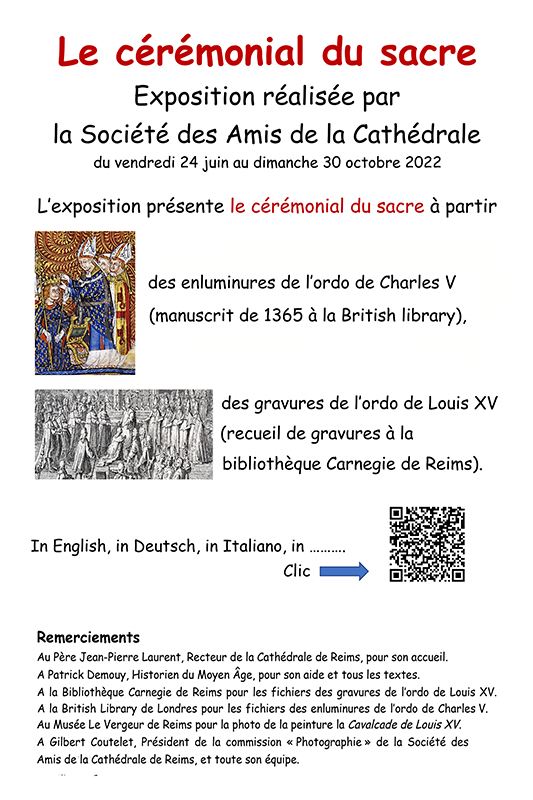 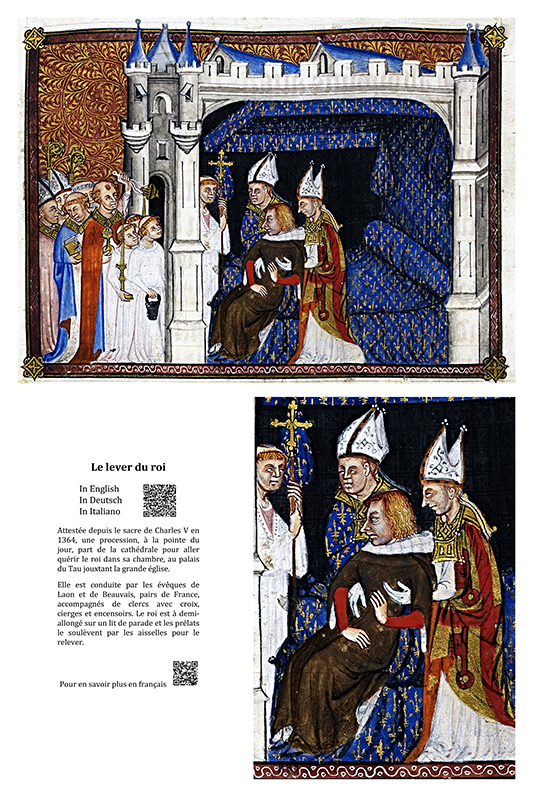 The Waking of the King

Evidenced since the coronation of Charles V in 1364, a procession, at dawn, leaves the cathedral to go and collect the king in his room, at the Palace of Tau adjacent to the large church.

It is led by the bishops of Laon and Beauvais, peers of France, accompanied by clerics with crosses, candles and censers. The king is half-lying on a parade bed and the prelates lift him up by the armpits.

The waking of the King

On October 25th. 1722, at about seven o’clock in the morning, the great cantor knocked at the closed door with his silver stick.

– « What do you want? ” replied the Prince of Turenne, great chamberlain.

« The king » said the bishop of Laon.

– « The king is sleeping », says the Prince of Turenne.

On the third knock the Bishop of Laon replied « We require Louis XV whom God has given us as king ». 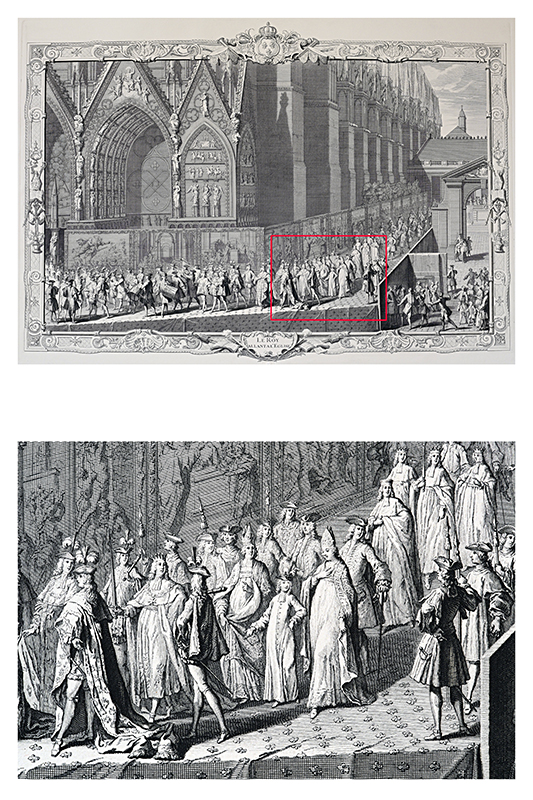 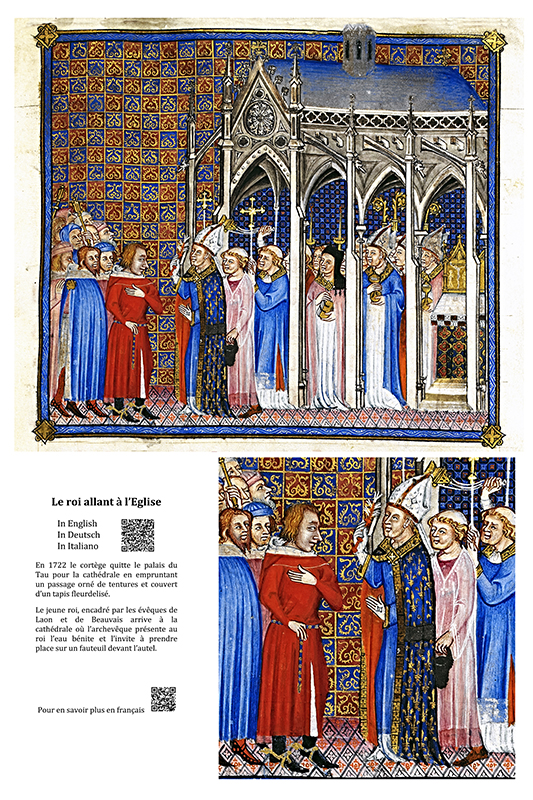 The King goes to Church

In 1722, the procession left the Palace of Tau for the cathedral via a passage decorated with drapes and covered with a carpet adorned with fleur-de-lys.

The young king, accompanied by the bishops of Laon and Beauvais, arrived at the cathedral where the archbishop presented him with the holy water and invited him to sit on a chair in front of the altar. 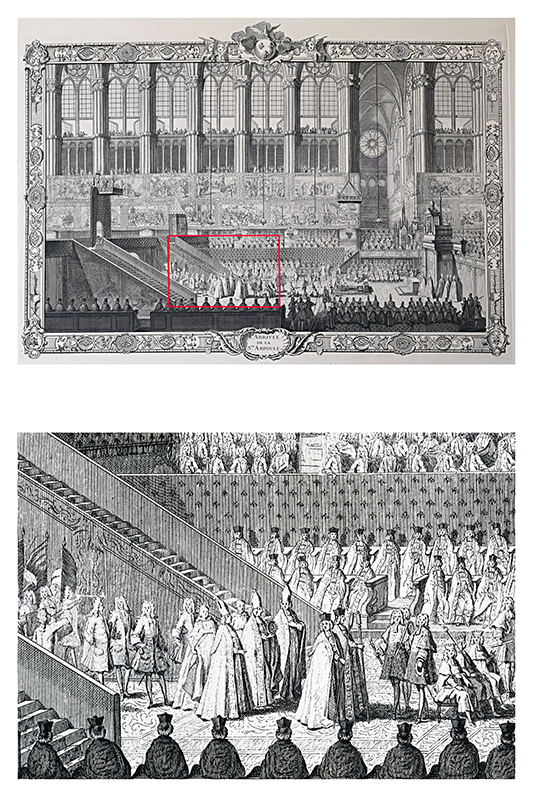 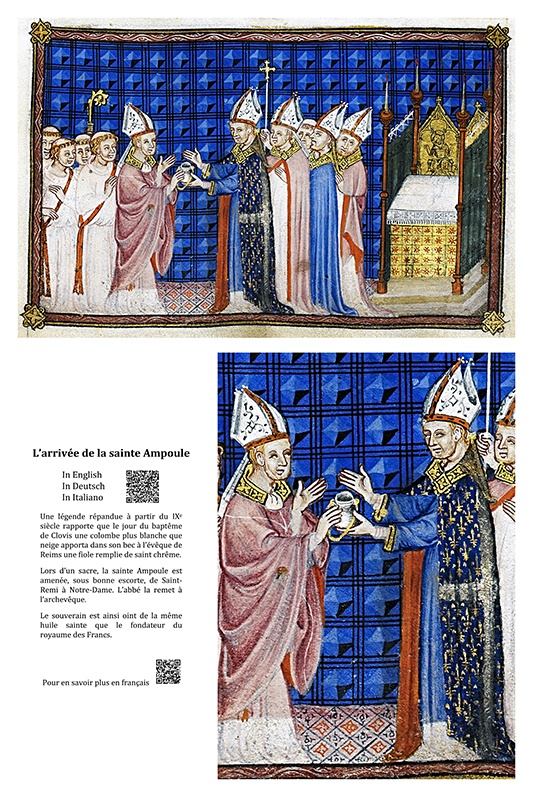 The arrival of the Holy Ampulla

According to a legend from the 9th century, on the day of  the baptism of Clovis a dove whiter than snow brought a vial filled with  holy chrism to the bishop of Reims.

During a sacrament, the Holy Ampulla is brought, under close guard, from Saint-Remi to Notre-Dame. The abbot gives it to the archbishop.

The sovereign is thus anointed with the same holy ointment as the founder of the Frankish kingdom. 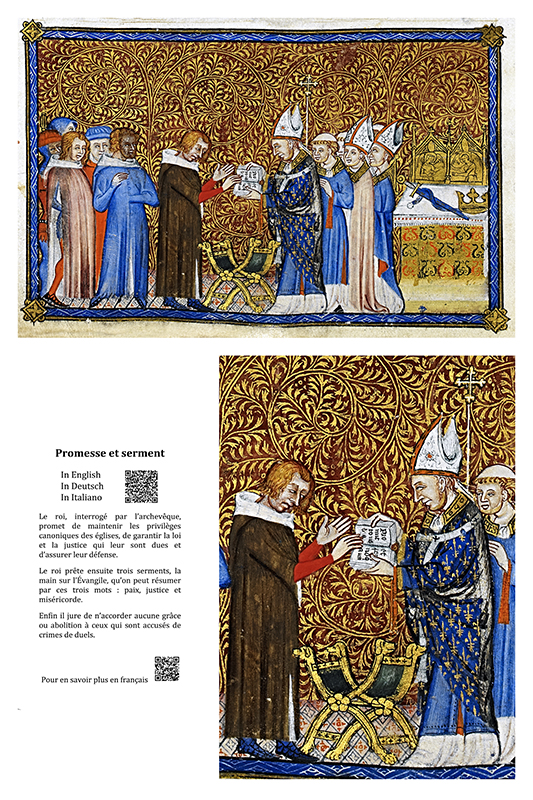 The king, questioned by the archbishop, promises to maintain the canonical privileges of the churches, to guarantee the law and justice due to them and to ensure their defense.

With  his hand on the Gospel, the king then takes three oaths, , which can be summarized by these three words: peace, justice and mercy.

Finally, he vows not to grant any pardon or abolition to those accused of crimes of duelling. 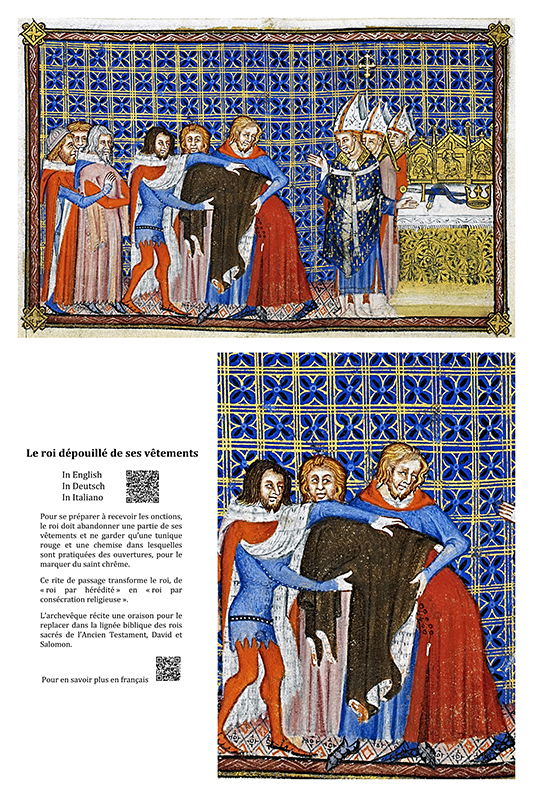 The king is stripped of his clothes

In order to prepare for office, the king has to shed some of his clothes and keep only a red tunic and a shirt in which openings were made, to mark him with the holy chrism.

This rite of passage transforms the king from « king by inheritance » into « king by religious consecration ».

The archbishop recites a prayer to place him in the biblical lineage of the sacred kings of the Old Testament, David and Solomon. 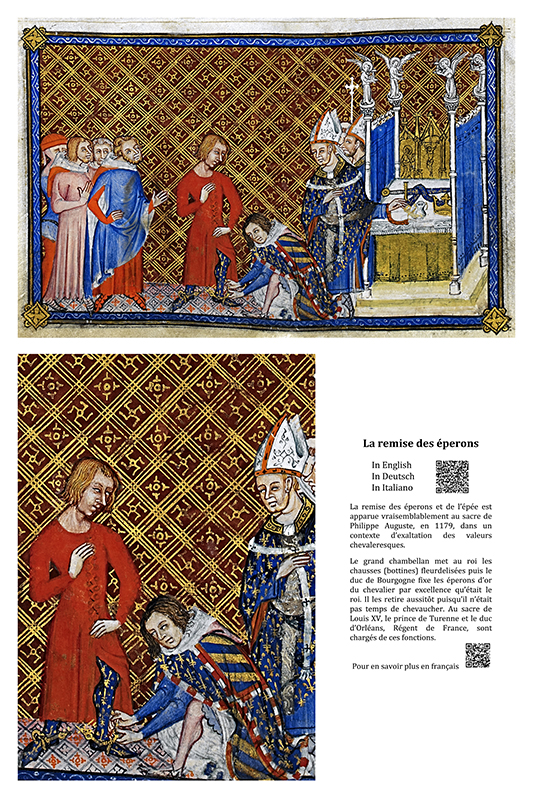 The delivery of the spurs

The delivery of the spurs and sword appeared at the coronation of Philippe Auguste, in 1179, in a context of exaltation of chivalrous values.

The great chamberlain put the shoes (ankle boots) adorned with fleur-de lys on the king, then the Duke of Burgundy attached the golden spurs of the knight par excellence that the king was meant to be. He immediately took them off since it  was not yet time to ride. In the sacrament of Louis XV, the Prince of Turenne and the Duke of Orléans, Regent of France, were entrusted with those functions. 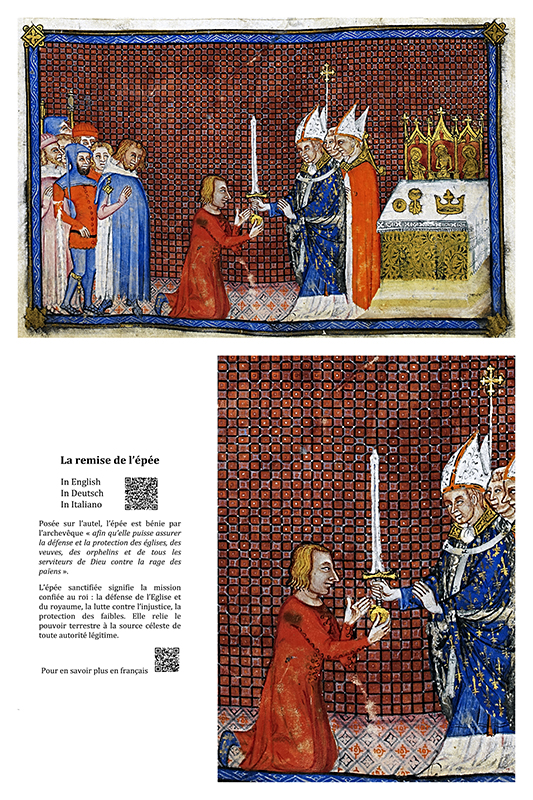 The delivery of the sword

Laid on the altar, the sword is blessed by the archbishop « so that it may ensure the defense and protection of the churches, widows, orphans and all the servants of God against the rage of the Pagans ».

The sanctified sword symbolizes the mission entrusted to the king: the defense of the Church and the kingdom, the fight against injustice, the protection of the weak. It connects the earthly power to the celestial source of any legitimate authority. 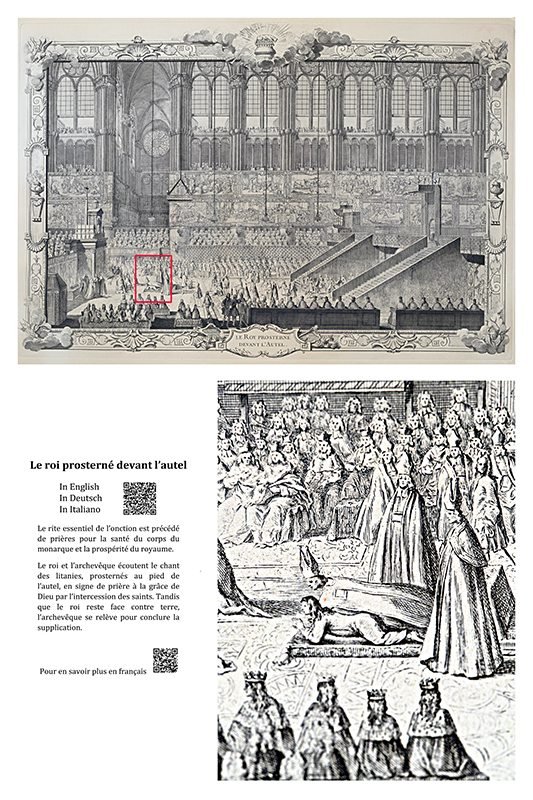 The King is bowing in front of the altar

The essential rite of anointing is preceded by prayers for the health of the body of the monarch and the prosperity of the kingdom.

The king and the archbishop listen to the song of the litanies, bowing at the foot of the altar, sending a prayer to the grace of God through the saints. While the king remains face to the floor, the archbishop stands up to conclude the supplication. 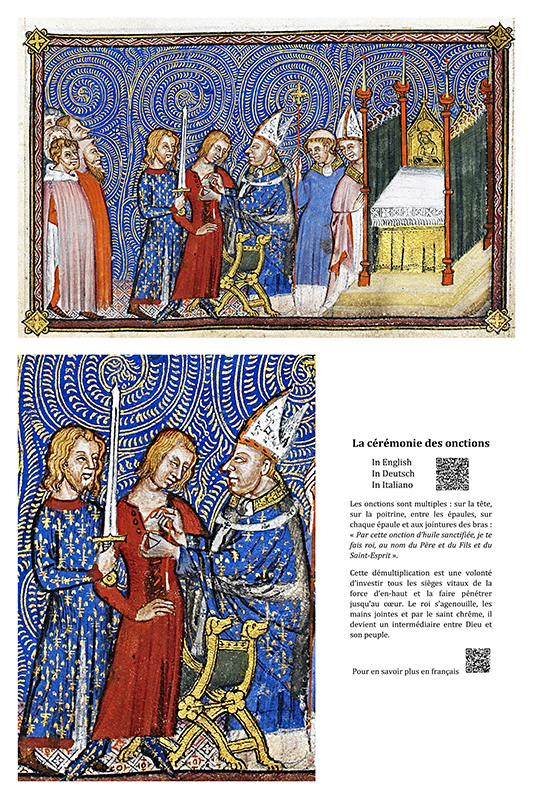 The ceremony of anointments

The anointing is performed through multiple steps: on the head, on the chest, between the shoulders, on each shoulder and at the joints of the arms: “By this anointing of sanctified oil, I make you king, in the name of the Father and of the Son and of the Holy Spirit”.

Those steps express  a desire to impregnate all the vital seats with the force from above and bring it through to the heart. The king kneels down, hands joined, and by the holy chrism he becomes an intermediary between God and his people. 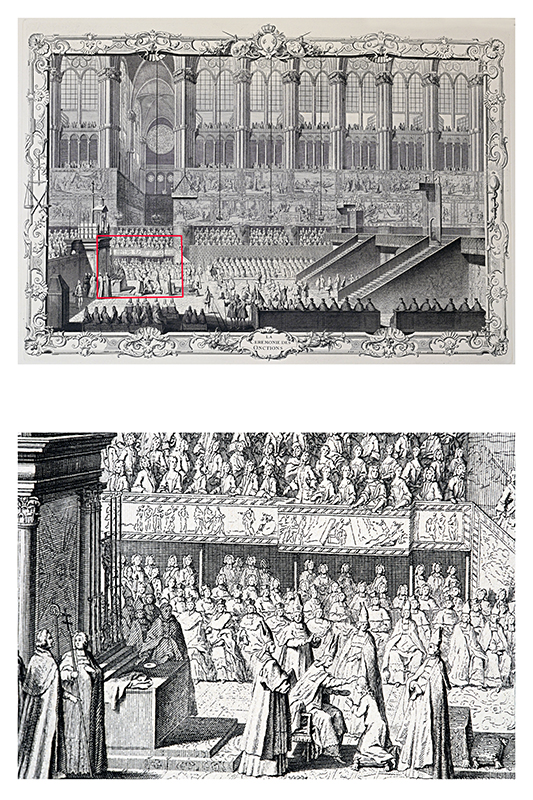 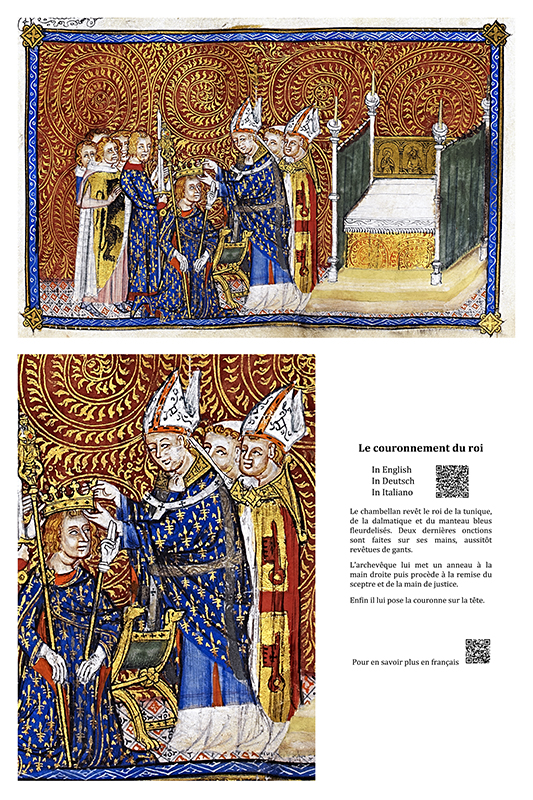 The coronation of the King

The chamberlain clads the king with the tunic, the dalmatic and the blue mantle with the fleur-de-lys. The last two anointments are done on his hands, which are immediately covered with gloves. The archbishop puts a ring on the king’s right hand and then gives him the sceptre and the hand of justice.

Finally he puts the crown on the king’s head. 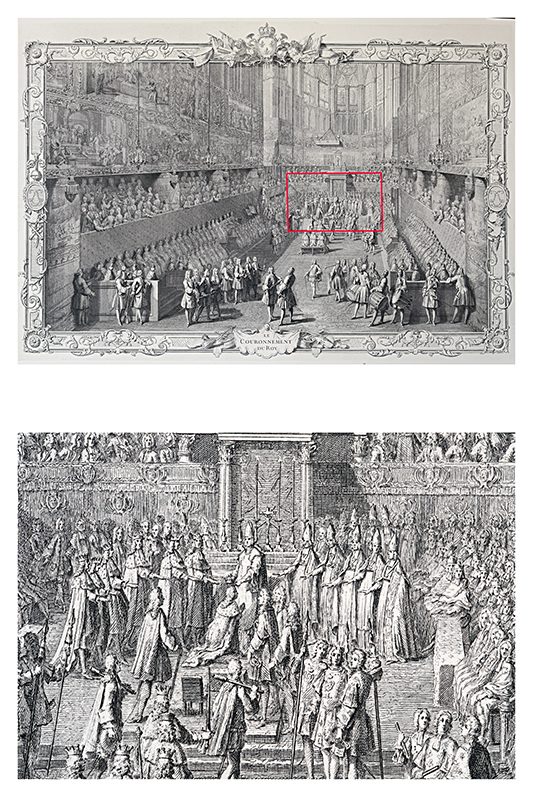 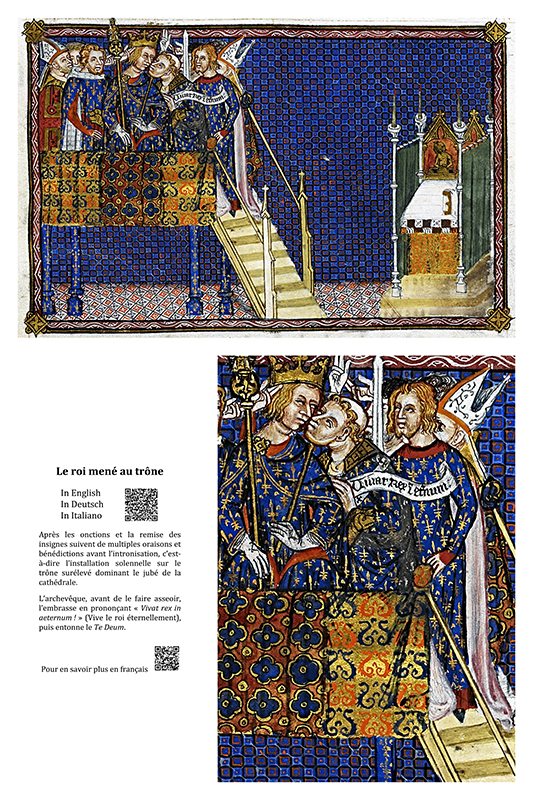 The King is led to the throne

After the anointment  and the presentation of the insignia, many prayers and blessings precede the enthronment, i.e when the king is seated on the elevated throne dominating the jube of the cathedral.

Before the King sits down, the archbishop kisses him and pronounces these words “Vivat rex in aeternum! Long live the king eternally, then sings the Te Deum. 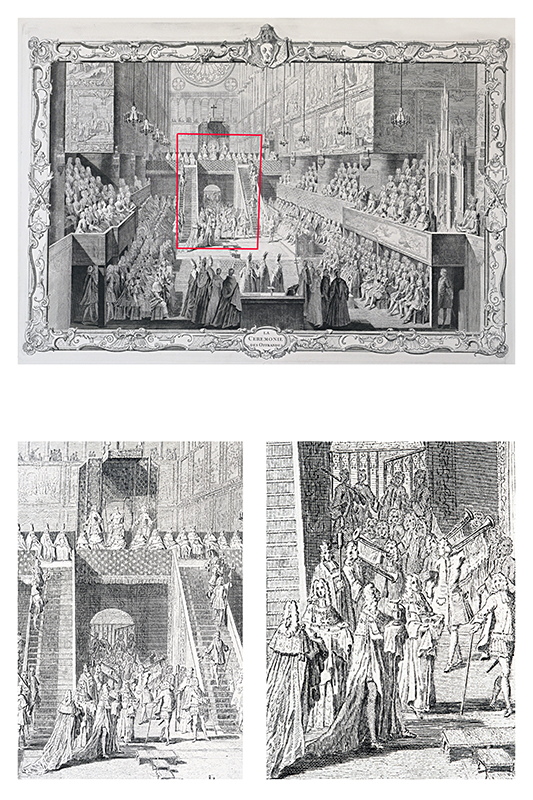 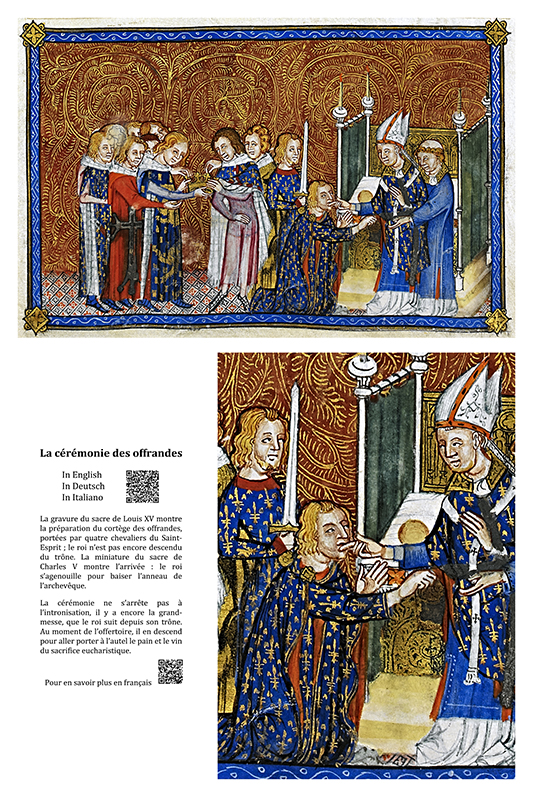 The ceremony does not stop with the enthronement, there is still the grand mass, which the king follows from his throne. When it is time for the offertory, he descends the throne to bring to the altar the bread and wine of the Eucharistic sacrifice. 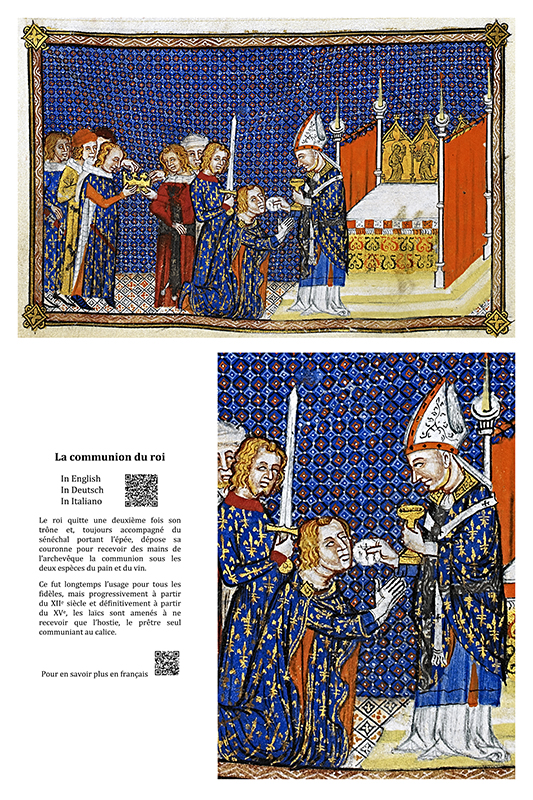 The Communion of the King

The king leaves his throne for the second time and, still accompanied by the seneschal bearing the sword, lays down his crown to receive communion in the form of bread and wine from the archbishop.

This was the practice for all the believers for a long time, but gradually from the 12th century and definitively from the 15th, only the host was given to the laymen while the chalice was for  the priest alone. 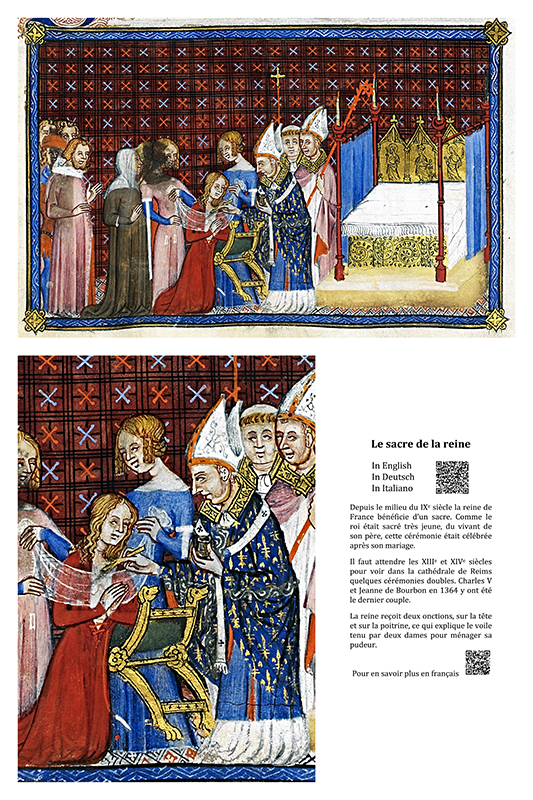 The sacrament of the Queen

Since the middle of the 9th century, there had been a sacrament for the Queen of France. As the king was crowned at a very young age, during his father’s lifetime, this ceremony was celebrated after his wedding.

It was not until the 13th and 14th centuries that the cathedral of Reims was used for a few double ceremonies. Charles V and Jeanne de Bourbon in 1364 were the last couple to be crowned there.

The queen was anointed twice, on her head and on her chest, which explains the veil held by two ladies to maintain her modesty. 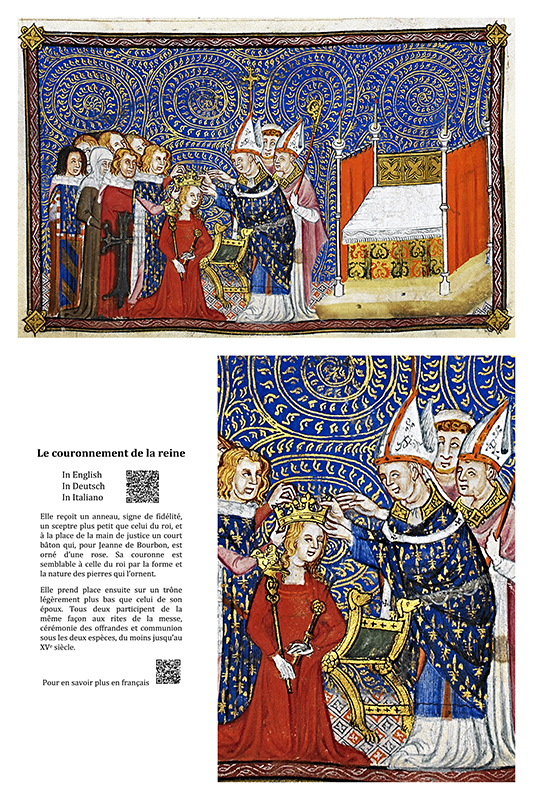 The coronation of the Queen

She receives a ring as a sign of fidelity, a sceptre smaller than that of the king, and instead of the hand of justice a short staff which, for Jeanne de Bourbon, was adorned with a rose.

The shape of her crown is similar to that of the king and decorated with the same kind of stones.

She then takes her seat on a throne slightly lower than that of her husband. Both participate in the same way in the rites of the Mass, the ceremony of offerings and communion with both bread and wine, at least until the fifteenth century. 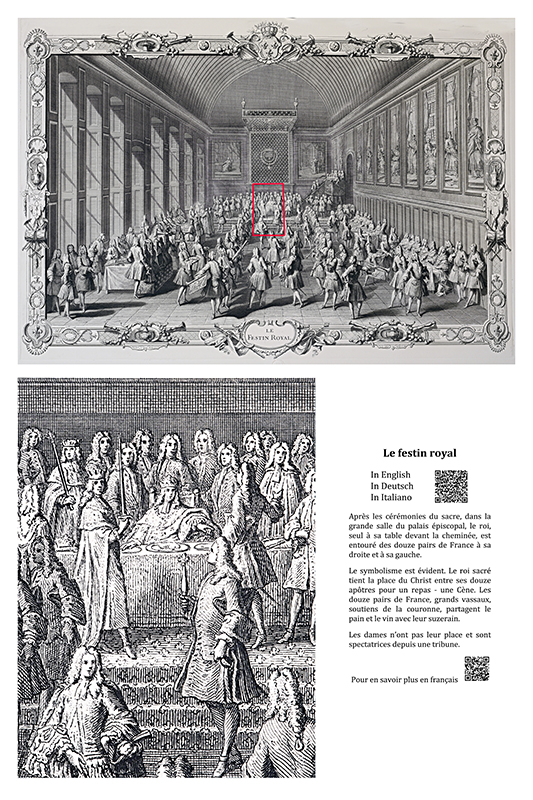 After the sacrament, in the great hall of the episcopal palace, the king, alone at his table in front of the fireplace, is surrounded by the twelve peers of France to his right and left.

The symbolism is obvious. The sacred king holds Christ’s place amidst his twelve apostles for a meal – a Supper. The twelve peers of France, great vassals, supporters of the crown, share bread and wine with their liege lord.

The ladies have no place at the table and are spectators from a grandstand. 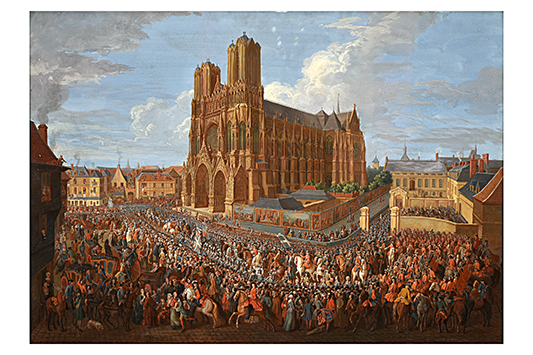